Back to Residential Portfolio

The client wanted to tear down a portion of their existing house and create a two-story addition that has an up to date open concept kitchen with a dining room on the first floor  and the second floor was a new master bedroom and bathroom. The east corner of the house had a great view of the beach and the client wanted to capture that view in the new addition. This design allowed for higher ceilings which was represented well with all the natural light that peeked into this addition. The new addition has 9 new windows to not only to brighten the space and to capture some of the views  but also placed to cool the space in the summertime as the house receives the coastal breeze which acts like an natural air conditioning system. Along with the windows a glass sliding door was placed on the first floor to keep the connection to the side/backyard.

Building within tight lots is always a challenge, in order to make sure the new structure would fit into the building setbacks, relocating the bulkhead had been completed, that also means cutting the existing foundation to fit a door to access the new bulkhead. Other challenges included the ceiling heights, the problem was not creating a space with higher ceilings, it came when the new roof was higher than the existing roof and when the two roofs were meeting as there was an existing dormer that was against the side of the new addition. If we did not address that issue on how the construction would be completed, this would be subjected to leaks later one which would create massive problems only months after the project is finalized. Consulting with the contracting team played a role in this process and we were able to correct this issue with the proper detailing.

The Scope of this Project Included 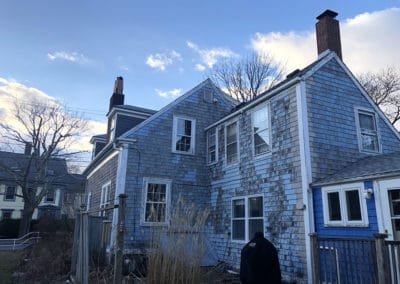 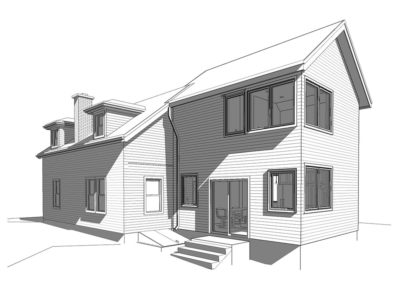